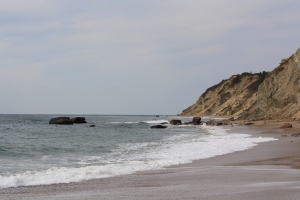 October 19th, 2013. We stood at the top of a steep staircase, marked with a warning that traversing the stairs would involve intense physical activity and should be avoided by those with heart problems, etc. With a “here we go!,” we started down the cliff-side stairway.

We’d arrived on Block Island earlier that morning – Matt and I with the puppy in tow – and watched the island approach as the sun climbed in the sky. To me, going to Block Island is a little like going home; even though I never lived there for more than a couple of weeks in the summer, there’s something about the island that calls to my soul. Matt, on the other hand, had never been, so I was very much looking forward to sharing it with him. He’d actually suggested we go and found us an open one-night reservation at a reasonable price – we’d wanted to earlier in the season but could never combine the chance to go with the right price to stay on the island. October, though, is a great time – some things are still open, but the island is nearly empty with only a handful of day-trippers or late-season vacationers enjoying the island’s autumnal side.

We were lucky to have good weather – low 60’s, partly cloudy – chilly if you’re standing still but gorgeous if you’re walking. We walked from Old Harbor up through town, past the statue of Rebecca and past the Block Island School to swing around the very southernmost part of the island. I don’t usually walk past the school so I was confused when we completely missed Southeast Lighthouse. We had to check our map and turn around, but we had great conversation on our walk, and it started to warm up as the day progressed. Southeast Light is one of my favorite spots on the island, so I wanted to make sure Matt got to see that before anything else. The whole lighthouse area, for those who have never been there, is on top of bluffs – there’s beach below, and then it’s a straight shot out to the Atlantic Ocean. The bluffs are one of the most beautiful parts of the island, but also one of the most desolate, because the stairway down to the beach goes about halfway down the cliff, and then it’s up to you to navigate the rocks for the rest of the stretch down.

So there we stood at the top of the stairs. The sun had come mostly out, there was a breeze off the sea, and the place was absolutely empty. We couldn’t WAIT to get the dog down to the beach – it would be his first time seeing the ocean and we knew it would be hilarious. So down we went. We introduced the dog to the water, which he was nervous about at first but took to pretty quickly – he didn’t jump in for a swim, but he had no problem running in the licking edge of the surf. We had a snack, and then some other folks came down the stairs to ooh and aah at the majestic beauty of the bluffs, and to coo and baby-talk at the dog. 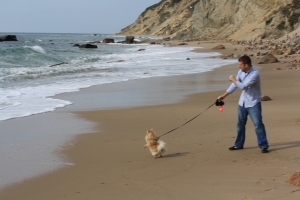 Matt decided that he wanted to go exploring, and he took off down the beach while the dog and I walked around the area near the stairs. After a few minutes, Matt called me over to where he’d been; we picked up our backpacks and headed over to an even more deserted area of the beach, where Matt had found a driftwood log and set it up across two of the rocks to make a little bench. He patted the seat next to him, and we sat down to watch the surf and relax in the solitude. There were one or two other couples milling around the beach, throwing rocks into the water. The dog kept trying to eat chunks of sand.

Finally, everyone left and we had the beach to ourselves. The tide had just crested and was going out, and the sound of the surf, the wind and the gulls became the whole world around us, as if there was nothing beyond that beach.

“Really? What is it?” I asked. He unzipped his backpack and pulled out a Barnes & Noble bag. I liked where this was going. Out of the bag he drew a thick rectangle wrapped in newspaper – clearly a book. “I know a thing or two about books,” I said, quoting an episode of the Potter Puppet Pals, “and that’s a book!” He smiled, nodded, and handed it over.

“Yeah,” he said, “what on EARTH could it possibly be.” So I pulled off the wrapping. It was the Barnes & Noble collector’s hardback of The Complete Sherlock Holmes. Matt knows I LOVE Sherlock Holmes, and this was a gorgeous edition in brown leather with gold-edged pages. 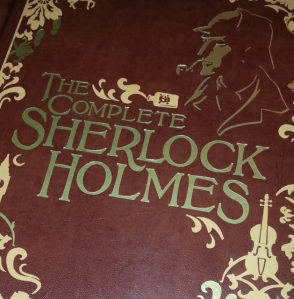 Possibly the coolest ring box ever. This bad boy is about 5 pounds and Matt carried that on our 9-mile hike, just waiting for the right moment – so awesome!

“Cool!” I said, though I was puzzled because I know I’d told Matt recently that I already have a complete set of the Sherlock Holmes stories. The leather-bound hardback, though, was definitely a nice touch – and timely, since we had just watched the Robert Downey Jr. Holmes movie during that past week.

“There’s a really cool story in here,” Matt said, flipping to the table of contents. Running his finger down the list, he said “A Scandal in Bohemia” and started to turn pages.

“Oh!” I said. “That’s one of my favorites; that’s the one where you meet Irene Adler. Holmes respected her immensely because she’s the only woman who ever outsmarted him. I love that one!”

“Oh, you do know it?” he said. “Hang on, it’s at the beginning of The Adventures of Sherlock Holmes section – here we go.” He opened to the title page of the section. The Adventures of Sherlock Holmes. There was a bump in the page, right above the R in Sherlock, as if sand or something had gotten stuck under the page. Matt pushed his finger down on the page and flipped it. The next page was titled A Scandal in Bohemia, and for those who don’t know, the first line of the story reads “To Sherlock Holmes she is always the woman.”

Fitting, I thought, since it was definitely not sand stuck under that page.

The center of that page – and the 600 or so below it – had been cut into. In the space the pages left behind there sat a little square of satin, cut to fit within the beveled opening. Nestled in the satin was a diamond solitaire engagement ring.

This photo was taken inside and doesn’t do justice to the ring’s sparkle At All.

He just grinned at me while I marveled at the beautiful gift, letting me take it in. I don’t have much experience with diamonds, and this one’s size combined with a knife-edge band that makes the setting nearly invisible looked almost too big and too perfect to be real. I knew from the unusual shape of the band (knife-edge all around) and from knowing Matt that this ring hadn’t been picked out of a case. It was custom designed, custom made for me. It sparkled gorgeously in the sunshine.

“Now I can ask,” he said, getting down on one knee and taking my hand, “will you do me the honor of becoming my wife?”

I tried to make the moment last, but everything was rushing – my head, my heart, my thoughts, all of me swirled into this frenzied “holy shit” moment.

Of course, Matt being Matt, I then got the full rundown of the diamond’s 4Cs, the adventures he had in waiting for the perfect diamond and then having the setting made, his frustration that the setting isn’t perfect yet but the whole point of this trip was that he was going to propose at some point, and the story of him cutting little squares out of a book well into the night on Friday. There I was, thinking he’d been downstairs playing his new Pokémon X game into the wee hours. I was worried that he’d be a bear in the morning because he came to bed at 2:30 knowing full well we needed to leave by 4:30 to catch the 7:15 Block Island Ferry from Point Judith. Little did I know, until he told me, that he’d been up creating the best ring box EVER and that he’d been unable to sleep because he was nervous.

As far as I’m concerned, as proposals go, it doesn’t get better than that.

P.S. – Dear Block Island, you know that pile of bricks next to Southeast Lighthouse that is clearly marked DO NOT TOUCH? After Matt and I climbed back up the bluffs and walked down the road to see the lighthouse, I totally touched them. Sorry. 😉

4 thoughts on “a proposal in bohemia”

© Leila A. M. Martin and www.leilaammartin.com, 2019. Unauthorized use and/or duplication of this material without express and written permission from this blog’s author and/or owner is strictly prohibited. Excerpts and links may be used, provided that full and clear credit is given to Leila A. M. Martin and www.leilaammartin.com, with appropriate and specific direction to the original content.