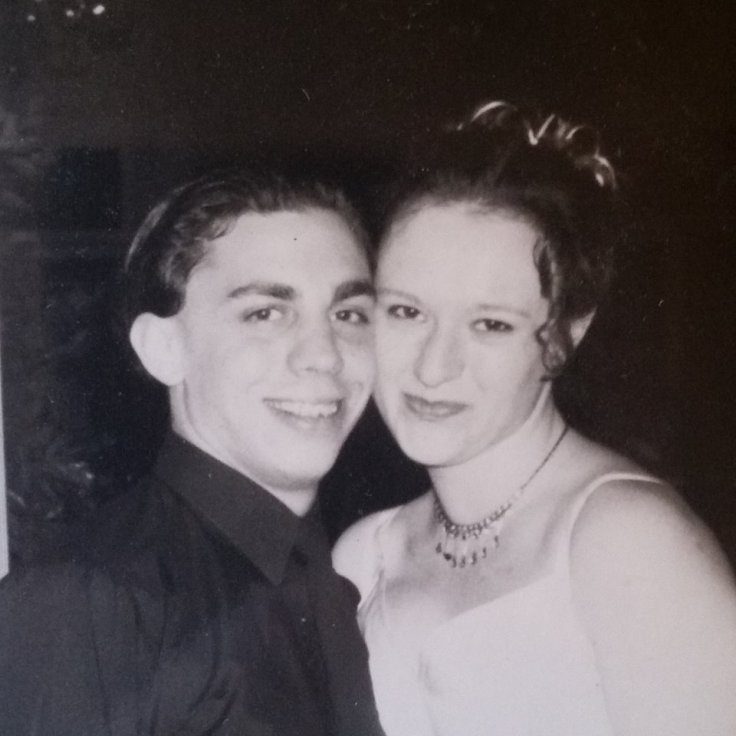 When I was in high school, I had the world’s biggest crush on Chuck Sasso.

I mean, really, who wouldn’t? That perfect hair, those gorgeous eyes, the adorably self-deprecating smile and a laugh like I’ve never heard before or since. Every time I saw him, the litany would start up in my head: notice me, notice me, notice me, notice me. Of course, I knew it would never happen. He had a serious long-term girlfriend, and I was just some music and theater weirdo, totally not part of the crowd he ran with.

And yet, he did notice me. We had some mutual friends, and on the times I was invited to hang out with them, it was always Chuck who did the most to make me feel welcome and yet, at the same time, protected. I know that sounds weird, but a lot of his friends were smokers, and smokers tend to offer smokes. Whenever anyone made to hand me something, it was Chuck who stopped them, Chuck who said “no, she can’t, have you heard her sing? She can’t ruin her voice.”

We forged a friendship that, while it never went very deep, was always very dear to me. I remember he brought me a grain of rice with my name on it once as a souvenir from a California trip, and he told me that he got it for me because I was the only one he could think of who would actually appreciate it.

There were always hidden depths to Chuck, but I feel like he let almost nobody see them. I only ever brushed up against them. Once, I wrote him a poem confessing my crush on him. The response I got was more than I ever could have imagined. Hastily scrawled in small writing all over both sides of an envelope was a letter confessing the inner turmoil he was facing as he tried to figure out his life (because at 16, we still believed that life could be figured out), his appreciation for my feelings and his desire to return them paired with regret that he couldn’t, that things were too confusing and that he cared too much about me to put me through dealing with all the madness going on in his life at the time.

How much of it was platitudes, I don’t know, but I kept it. I still have it, somewhere. Because while the contents both warmed and broke my heart, it was the action that mattered most. He could have blown me off, he could have told me to get lost or not said anything at all, but he didn’t. He took the time to write me a letter and share a piece of himself with me.

After high school, as kids of our generation did, we lost touch because social media was only a fledgling thing. But Facebook helped us find each other again, and as adults our friendship grew, again, into more than I could have imagined. We shared snark, we commiserated over people’s stupidity in general and specifically their inability to grasp basic grammar concepts. We poked each other 58 times in a row, which is more than all my other Facebook friends combined over the entire life of my Facebook account. Again, I always got the feeling that Chuck appreciated the weird things I did, like sending letters to pen-pals. He always sent me his new address whenever he moved, and I always sent him something, and sometimes he’d send me an excited picture back.

We were never best friends, but Chuck always meant a lot to me, and I feel pretty confident saying I meant something to him too.

I returned from an international trip late on Saturday night and checked Facebook once I was back on my cellular network, only to find posts about Chuck’s death. Exhausted, jet-lagged, my first thought was that it had to be some kind of joke, like those celebrity death hoaxes. But the more I looked, the more I understood that I was seeing something real.

And I’m still not sure what happened to the world. Everything has turned sideways. At this point no details of what happened have been shared, only that he died in his sleep. I’m constantly switching between rage and despair and incredulity. This can’t be happening. Can’t have happened. This doesn’t happen, not to someone in his mid-30s, not to someone whose smile could light up a room.

We Newington kids, we’ve lost a lot of people over the years. Some while we were in school, some since. Some because they wanted it, some who never saw it coming. We’ve had our share of grief and loss. And I thought that for a while, we were out of it. Of course everyone dies eventually, from one thing or another, but Chuck was so alive. It’s hard to imagine Death knocking on his door. I only hope that he went peacefully, and that he was watching last night when Ramsay Bolton finally got his.

Goodbye, my friend. You always had a special place in my heart, and I will never, ever forget you.